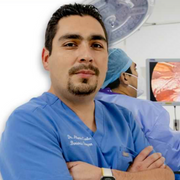 Dr. Rivas acquired his four-year physician certification at the Faculty of Human Medicine of the Autonomous at the University of Nayarit. He finished a clinical entry level position at the Regional General Hospital in Tepic, Nayarit, Mexico and made his residency at the General Surgery of the National Medical Center Northwest of the Mexican Social Security Institute, where he was Chief Resident of General Surgery from 2011-2012.

Dr. Alberto Carlos Rivas made a particular association at the Nephrology Institute Tijuana and Hospital Angeles Tijuana in Bariatric and Metabolic Surgery, where he performed more than 30 Bariatric and weight reduction surgeries each week. Dr. Alberto Carlos Rivas has stomach injury preparing finished in California and is a functioning individual from the AMCG (Mexican Association of General Surgery), the AMCE ( Mexican Association of Endoscopic Surgery) and was ensured by the CMCG (Mexican Council of General Surgery) in 2012.

Dr. Alberto Carlos Rivas' great instructive qualifications, have made him seek after additional preparation and confirmation, along these lines going to the Transcongress course in Gastric sleeve at gatherings in Los Cabos, Mexico in 2015. He likewise got progressed Incision and  Laparoscopic Surgery preparing in 2016 from the AMCE. Dr. Rivas is a profoundly proficient specialist in the field of Bariatric surgical procedures.

I am so thankful that I found Perfection Makeover and Laser Center in Cancun, Mexico for my breast augmentation. I had researched local plastic surgeons and been considering having the surgery for over a year.

Katy is six years old and had her first placental stem cell implants in June 2008 - one month ago. She is so much more attentive and present. Her seizure activity and spasticity have diminished significantly; she is trying to talk; she is so much more relaxed. She is eating more and sleeping much better.

Testimonial of Cosmetic Surgery in Tijuana, Mexico by Gastelum

Before and After Dental Crowns in Cancun Mexico

These are the before and after images of patients who had dental crowns in Cancun, Mexico at Cancun Dental Specialists.

Story of Patients Treated at ProgenCell Clinic in Tijuana, Mexico

"The good news is that I seem to be improving almost daily. If I continue to improve over the coming weeks I will be very happy indeed and I will be telling everyone I know about your wonderful clinic and the miracle of stem cell therapy."