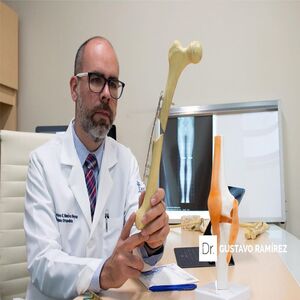 Dr. Gustavo Ramirez is a the best choice for you with the top service and care related to Orthopedic Surgery. He is providing exceptional treatments in his clinic in Jalisco, Mexico.

In charge of the Traumatic Spine and Hip Module at the General Hospital of Zone 45, in the Morning shift.

• Faculty of medicine  He studied with the 8 semesters of the medical career.

• Completion of a practical theoretical professional exam in July 2005, accrediting both exams.

• Rotating undergraduate internship carried out at the Hospital Ángeles del Carmen, rotating through the services of Gynecology and Obstetrics, Critical Medicine, Internal Medicine, Emergencies and Surgery, obtaining a letter of completion of the internship.

• Second period of social service carried out in the Mobile Unit of the Community Medicine Program of the UAG.

• Specialty Course in Orthopedics and Trraumatology.

• Carried out in CMNO UMAE HE, where he rotates for 4 years during the different phases of training of the resident of this specialty, complying with the requirements and programs of said specialty, acquiring different clinical-surgical skills, finishing said course in February 2011.

• Rotating mainly in the modules of Spine, Pelvis, acetabulum, Hand and Shoulder.

• Currently in charge of the Traumatic Spine and Hip service at the Mexican Institute of Social Security, Regional General Hospital 45 "Ayala" in the morning shift.

Completion of the Advanced Trauma Life Support (ATLS) course taken to cavo at the Angeles del Carmen hospital in the city of Guadalajara, taking the exams, accrediting, thus obtaining credential validated by the ACS valid for 4 years.

X International Meeting of the Mexican Society of Hip Surgery.

American Academy Orthopaedic Suergeons meeting, which I attended as an affiliate international member.

Participation as Speaker in the general session with the theme Lumbalgias at the HGR 45 "Ayala" IMSS hospital.

Dr. Linette Gómez Espinoza is a board-certified Traumatologist and Orthopedist with a high sp...

Doctor Name: Dr. Jose Antonio Arce Certifications and Experiences: Certified as a specialist in Orthopedics and...

Bio Dr. Victor received his medical degree from the Universidad Autónoma de Nayarit. He then traveled to Guadala...

Dr. Gustavo Ramirez is a the best choice for you with the top service and care related to Orthopedic Su...